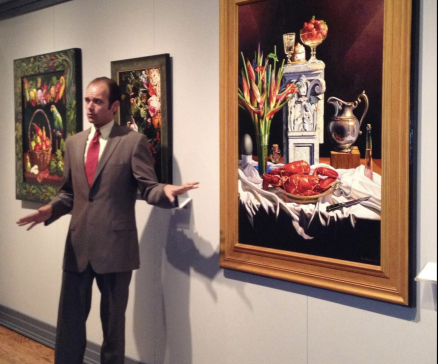 Caption: Eric I. Hornak-Spoutz lecturing at a Los Angeles museum, 2012.

-Board of Governors of the Federal Reserve System

-National Museum of Women in the Arts

-Academy of Motion Pictures and Sciences

-Indiana University: The Kinsey Institute for Research in Sex, Gender and Reproductionq

-Rock and Roll Hall of Fame and Museum

Additionally, Mr. Hornak-Spoutz has curated exhibitions throughout North America, at numerous public venues including the Board of Governors of the Federal Reserve System and the Florida State Capitol Complex.

In April 2020, he was appointed as the Midwestern marketing director for a large fine art consultancy based in the New York Metropolitan Area.

Mr. Hornak-Spoutz earned a Bachelor of General Studies degree with concentrations in General Business & Historical Studies, with a minor in English from Fort Hays State University. He is currently a student at Rutgers University-Camden where he is writing a thesis for the completion a Master of Arts in Liberal Studies with a concentration in Creative Arts and Literature; and at Pepperdine University in Malibu where he is earning a Master of Science in Management and Organizational Leadership.

Currently he is a resident of Auburn Hills, Michigan.

A descendant of one of America's oldest families via the bloodline of his paternal grandmother, Mr. Hornak-Spoutz is the eleventh-generation descendent of Mayflower passenger, Francis Cooke (1583-1663).  He is also the thirteenth-generation descendant of captain John Marchant (1540-1592), and the tenth-generation descendant of Massasoit Sachem (1580-1661). Via his mother, Mr. Hornak-Spoutz is the scion of the Hornak/Wolf art world family. In 1951 his uncle Julius Rosenthal Wolf (1929-1976) graduated from Dartmouth College and was appointed as assistant director of Edith Halpert’s Downtown Gallery in New York City where he managed the mid-careers and legacies of Georgia O’Keeffe, Arthur Dove, John Marin, Charles Sheeler, and Charles Demuth. Mr. Hornak-Spoutz’s other uncle, Ian Hornak (1944-2002) was one of the founding artists of the Photorealist and Hyperrealist movements. Together Hornak and Wolf established the Jay Wolf Collection at Dartmouth College's Hood Museum, which is considered to be the museum's seminal collection of American Modern & Contemporary masterworks. 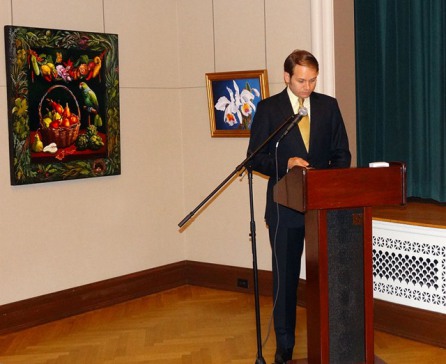 Caption: Eric I. Hornak-Spoutz lecturing at the Washington County Museum of Art, 2013.